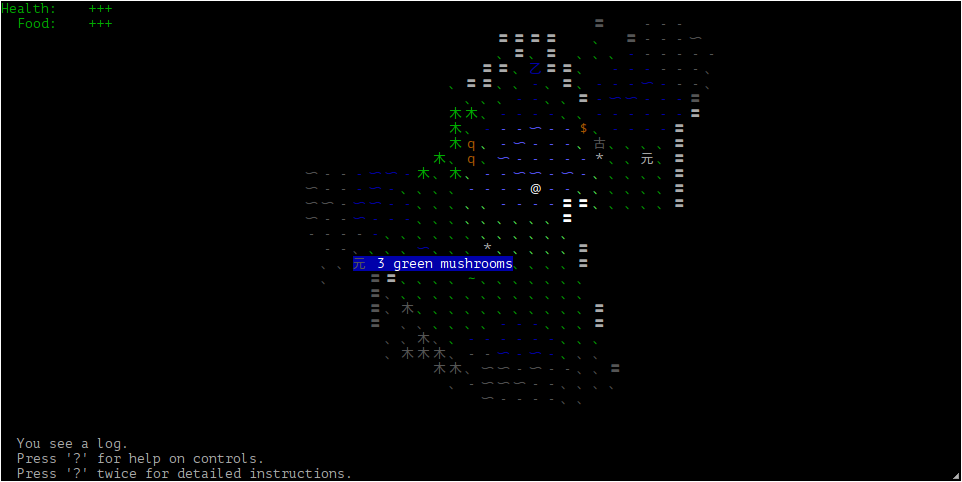 It's a way of rendering square tiles in a plain-text terminal, while keeping all in-game text normal-sized and readable.

This is a compromise between ASCII graphics and graphical tiles. ASCII graphics have the advantage of portability, network transparency and being both nice-looking and customizable. The downside to ASCII graphics is that letters have a 2:1 proportion. (Each letter of the alphabet is roughly half as wide as it is high.) This makes in-game squares look 'thin' and results level maps that are severely out of proportion.

So: all that's left to do is to output in-game squares (monsters, items, floors and walls) with 'fullwidth' symbols, and in-game text (overlays, labels, menus) with regular 2:1 letters.

Thus you end up with ASCII graphics that are both properly proportioned and readable.

What do I need to get this to work?

Theoretically, nothing. All modern terminals and telnet clients support Unicode and fullwidth characters. At worst you might need to install an East Asian (Chinese or Japanese) font, but most modern systems should probably be capable of displaying East Asian characters out of the box.

Will this work in other roguelike games?

With a simple coding effort, yes. Since fullwidth symbols are exactly two regular symbols wide, all you'd need to do is change the map display in your game to be half as wide and replace all ASCII symbols with their fullwidth equivalents. (It gets harder if you need to overlay text displays right on the map, but even here the logic is very straightforward.)